HomeAsk your Senator to co-sponsor S.Res. 566All standardsFeatured StoriesUS Prepares to Sail Warship into Black Sea...

Should the Recent Incident in the Sea of Azov be viewed as a New Sudetenland Crisis for the West?

The recent act of aggression against Ukraine in the Sea of Azov and Kerch Strait have shown a new Kremlin tactic being employed – “gunboat diplomacy” in which the threat of force equates with an attempt to create a new revisionist standard for gaining territory or influence.

As of December 4, the Ukrainian Infrastructure Minister Volodymr Omelyan reported that the Kremlin partially restored access to Ukrainian ports in the Sea of Azov weeks after its navy was fired upon by its neighbor.

In response to the incident, NATO Secretary-General Jens Stoltenberg, on behalf of the alliance, called on the Kremlin to immediately release the Ukrainian sailors and ships seized and “allow freedom of navigation and unhindered access to Ukrainian ports.”

The United States is preparing to send a warship to the Black Sea. This proposal came on the heels of the Russian Foreign Ministry accusing the Ukrainian government of undertaking “active preparations” for an offensive against Russian-held territories in the eastern parts of Ukraine. On the other side of the globe, the USS McCampbell guided missile warship performed a freedom of navigation operation (FONOP) in contested waters in the Sea of Japan, specifically near Peter the Great Bay which includes the home of Russia’s Pacific Fleet in Vladivostok. According to a navy spokeswoman, such operations demonstrated that the US will fly, sail or operate wherever international laws allow. “That is true in the Sea of Japan, as in other places around the globe” – an answer implying a US naval visit to the Black Sea waters in not entirely out of the question. This would undoubtedly increase tensions between the US and Russia over spheres of influence. 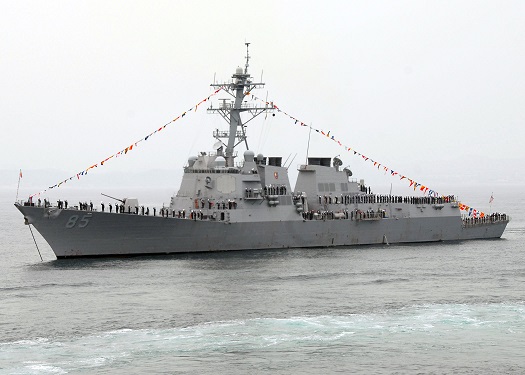 On December 6, the US carried out an ‘extraordinary’ flight over Ukraine under an international military surveillance treaty – the Open Skies Treaty. Since 2002, the treaty has allowed 34 signatory states to send unarmed observation flights over one another’s territory.

The Kremlin laughed off the US warship moves in the Sea of Japan as “unsuccessful” while reacting angrily to reports that US ships could enter the Black Sea. Russian parliamentarians have stated that Russia would respond “accordingly” if their waters were violated, not excluding a repeat of the incident from February 1988 in which a Soviet frigate rammed a US cruiser in the Black Sea.

For the Kremlin, gunboat diplomacy is a subsequent attempt to put the old empire – Tsarist or Soviet – back together brick by brick. Claiming legitimacy and controlling the Sea of Azov could be the springboard for future territorial contests. According to Stephen Blank, a senior fellow for Russia at the American Foreign Policy Council, Kremlin tactics go beyond rebuilding its old empire but to undermine the post-Cold War status quo in general, including such principles as freedom of the seas and freedom to navigate the Black Sea. Such forceful acts, Blank contested, show that the Kremlin can only advance its interests – whether legitimate or not – by force or the threat of it. As he stated, there is no other “instrument” in the Kremlin’s arsenal that can compel people to pay attention to them.

In citing historical justice – a bit of historians’ jargon that means a territory or region was at one time “historically ours” – to legitimize past and recent acts of aggression, the Kremlin is creating a slippery precedent. More importantly, historical justice serves as specious justification for any revisionist, imperialist state to bully its neighbors.

This new episode of gunboat diplomacy marks a test for the NATO alliance and the Western democracies. In a recent New York Times opinion piece, Ukrainian President Petro Poroshenko called for further western economic sanctions as a sign of support from the international community against the Kremlin’s latest assault. The Ukrainian president claimed the Kremlin sought to return to the era of seizing property or territory by force. He questioned whether the western democracies will allow such tactics to spiral out of control by appeasing the Kremlin or stand up for what is right.

Calling to mind the term ‘appeasement’ evokes the memory of the Munich Crisis of September 1938 where Hitler’s aggressive demands of Czechoslovak territory (i.e. the Sudetenland) were met by Western European leaders as a means of preventing war on the continent. The lesson then was that appeasement proved worthless as it did not prevent war but escalated events leading up to its outbreak in September 1939. Certainly it is not out of the question that the annexation of Crimea eerily resembles a new Austrian Anschluss or that the Sea of Azov incident smells of a new Sudetenland crisis.

If compared in these terms, it is high time to apply to the Kremlin the Munich analogy. Certainly the world would have probably been a better place if Hitler had been consequentially challenged after he violated international laws by disregarding articles of the Versailles Treaty concerning the size and scope of Germany’s military; re-militarization of the Rhineland, and annexations of Austria, the Sudetenland, and the Memel (Klaipėda) seaport.

Perhaps a response to this Munich analogy should also come from the experiences of World War II. Stephen Blank proposed such a western reaction to the Kremlin’s actions in the form of a Lend-Lease 2.0 act. We will recall that the Lend-Lease Act, ratified in March 1941, was then neutral America’s response to the war on the European continent. It’s goal was simple – to defeat the Axis Powers by distributing foodstuffs, oil, and military material to Allied nations including Great Britain and the Soviet Union.

In emulating the precedent set by President Franklin D. Roosevelt, Blank suggests Ukraine lease Black Sea harbors to the US and NATO – whose frigates would make port calls to Mariupol, for example, showing the Kremlin that their high-seas aggression brought NATO to Ukraine and not the other way around – while the US and NATO lease Ukraine weapons to fight. His argument for this West-Ukraine relationship is simple: to impose punishment on the Kremlin that exceeds the crime while restoring balance, regaining escalation control and strategic initiative in the contested region.

Are you interested in funding PAC’s advocacy efforts to increase sanctions on Russia?
Join the cause with PAC by clicking