HomeAsk your Senator to co-sponsor S.Res. 566All standardsNewsEmbassy Celebration of Poland’s Centennial of...

The following article and image are republished with permission of the author and publication. 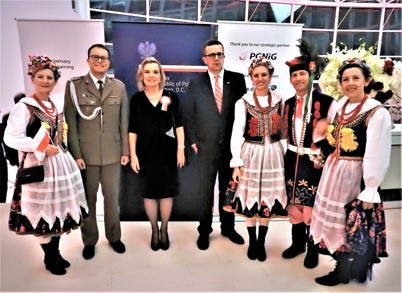 WASHINGTON, D.C. – It was a genuine Sto Lat! – 100 Years! for the nation of Poland when it proudly celebrated Poland’s Centennial of Regaining Independence. Subsequently, the Embassy of the Republic of Poland conducted a massive celebration here on November 13, 2018 to commemorate the 100 years of regained independence that occurred on the very auspicious day of November 11, 1918.

Such a momentous occasion obviously called for an equally momentous celebration, and Ambassador Piotr Wilczek admirably rose to the occasion with over 800 invited guests in attendance for the ceremonies and reception. Such a large number of invitees necessitated a venue that could comfortably accommodate everyone, and the magnificent, soaring glass-fronted United States Institute of Peace building, located just north of the Lincoln Memorial, fit the bill perfectly. The Institute was illuminated in red and white to reflect the Polish national colors.

Ambassador Wilczek warmly greeted everyone and in his welcoming address he emphasized the excellent relations between Poland and the United States and highlighted his remarks by saying: “History has shown that we are stronger together than separate, that when we act in solidarity the world listens. And as new times bring new challenges the strong and enduring Polish-American alliance will respond with effective and innovative solutions.” Wilczek also bespoke of the great strides that Poland had made in the recent decades: Poland is now a fully participating member of many international organizations such as NATO, the United Nations, and European Union. Poland’s economy is robust and growing at a steady rate … there is much to celebrate on this centennial of Poland.

The evening’s speakers included Poland’s Minister of National Defense Mariusz Blaszczak, who was on an official visit to Washington, Polish Senator Anna Maria Anders – Plenipotentiary of the Prime Minister for International Dialogue, and Assistant Secretary of State for European and Eurasian Affairs Wess Mitchell, representing the U.S. Department of State. Both Minister Blaszczak and Senator Anders reinforced and amplified the ambassador’s previous remarks. They also spoke about the many onerous hardships – and eventual triumphs – of Poland over the past 100 years, and the utter horror, coupled with massive devastation, that the nation endured during World War II (1939-1945), and the 44 years of imposed harsh communist rule that followed it.

Secretary Mitchell proudly stated that “The United States was the first country to recognized Poland’s independence in 1918, in a way repaying the heroism of Generals Kazimierz Pulaski and Tadeusz Kosciuszko who had supported America in her own fight for independence.” He also emphasized that in 1921, two years after Poland’s regained independence, Poland arrested the (westward) spread of Bolshevism on the Warsaw banks of the Vistula River during the Polish-Soviet War. A Russian victory would have resulted in the spread of communism across all of western Europe. He spoke that the Poles in 1989 triumphed again over the Soviets when they overthrew the communist government imposed upon Poland since 1945 at the end of World War II.

Those among the critical mass of independence celebrants included the Washington diplomatic corps with its military attaches, representatives of the U.S. administration and armed forces, university students, Polish news media, guests from prestigious think tank and cultural institutions, nation-wide Polonia leaders and honorary consuls. Embassy Chef Jan Gorszczyk-Kecik organized an excellent buffet that was savored by all. A professionally operated compact photo studio afforded everyone to carry home a unique centennial souvenir post card. Many participants afforded themselves of the wonderful opportunity to be photographed with members of the Ojczyzna Polish Dancers attired in their very colorful and authentic folk costumes, as also occurred many times throughout the venue during the festive evening. Pianist extraordinaire Brian Ganz regaled the audience with the presentation of celebrated compositions by Fryderyk Chopin.

It was in all respects a most memorable Sto Lat Polska! evening for Poland as it now embarks on the exciting beginning of its second century of independence: