Brexit – Positives and Negatives for Poland

What are the potential effects of Brexit on Poland?

There are over 900,000 Polish nationals residing in Great Britain, the largest group of foreign nationals in the UK. Migration rose exponentially following Poland’s accession to the European Union and the opening of western borders in 2004. More than 22,000 small business have been established by Poles in the UK, and Polish is the second most spoken language in Britain after English. Therefore, the 2016 referendum which resulted in favor of Britain leaving the EU raised concerns over the future of Poland-UK relations.

On December 20, 2018, Polish Prime Minister Mateusz Morawiecki met with Prime Minister Theresa May in London for the third set of Polish-British intergovernmental meetings. Topics discussed include bilateral cooperation, economic relations, security and defense, cooperation in the fields of science and education, and the Brexit deal. Regarding military relations, there is a contingent of approximately 150 British troops of a Reconnaissance Squadron in Poland. Prime Minister Morawiecki commented, “transatlantic cooperation and ensuring NATO’s continued consistency in areas such as the eastern flank remain crucial.” 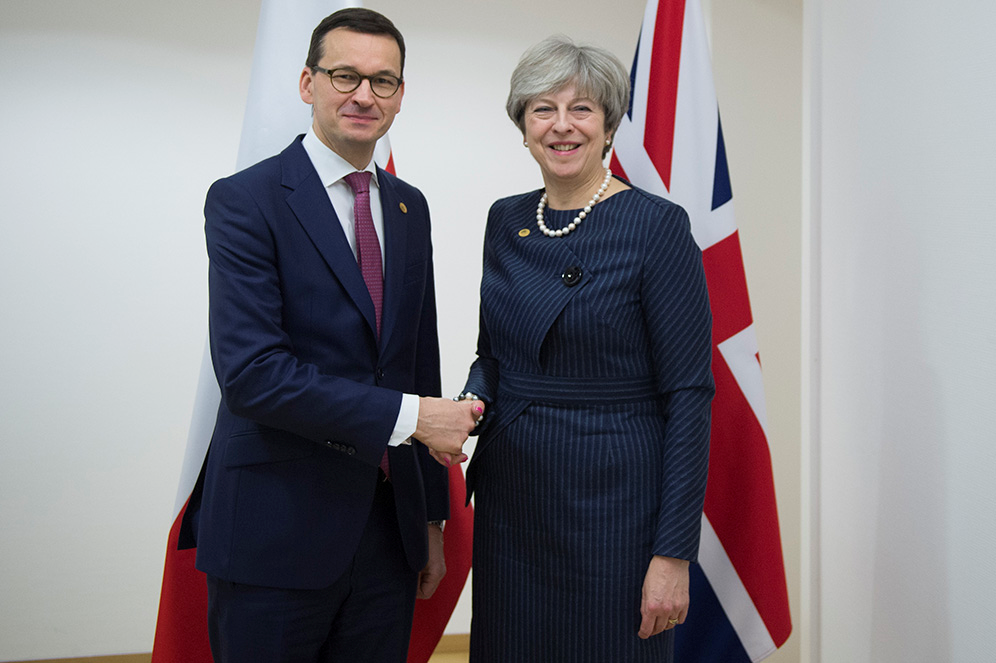 However, prominent areas of concern include economic relations and residency. If a hard Brexit occurs, it threatens Poland-UK trade dynamics. UK is the second biggest importer of Polish goods, so it is an important economic partner. A hard Brexit will likely result in in the imposition of tariffs on trade between the UK and other EU members. According to Janusz Bugajski of the Center for European Policy Analysis, customs duties on Polish exports to the UK could rise by 8.5 %. However, during the intergovernmental meeting in December, Prime Minister Morawiecki optimistically remarked, “Our aim is to preserve free trade, which is so significant for Polish business.”

Moreover, there is potential for Poland economically benefiting from Brexit. Prime Minister Morawiecki also commented, “We are happy about the fact that they found a new home, however, as our economy is blooming, we would like to encourage our citizens to consider returning to Poland, although we respect everyone’s personal choices.” Additionally, in a survey of 600 Polish business owners in the UK, 45% said they were considering moving back to Poland or to another country. This indicates a potential for businesses being relocated to Poland.

With over 900,000 Polish nationals residing in the UK, the Federation of Poles in Great Britain voiced concerns to Prime Minister May, fearing that EU citizens would become illegal immigrants after Brexit. However, Prime Minister May has soothed concerns over residency and citizenship, urging Poles to stay in the country and insisting that they are more than welcome in the UK. Moreover, a special EU Settlement Scheme, which will take effect this year, will allow for over 3 million people who reside in Britain to legally remain in the UK.

In conclusion, the future of Brexit and its potential effects remains unclear. In the past two weeks, the British Parliament has rejected Prime Minister May’s Brexit deal, a second referendum, and leaving the EU without a Brexit deal; meanwhile, March 29th steadily approaches. A delay in the exit date would require the approval of all 27 EU member states. On a brighter note, there is a strong line of communication between Poland and Britain providing foundation for a continuation of strong political, economic and military relations.