Polish President Andrzej Duda Presents Bishop Emeritus John W. Yanta With the Commander’s Cross Of The Order of Merit Of The Republic Of Poland

It was an event of a lifetime!  At a presidential welcome reception at Our Lady of Częstochowa parish in Houston, Texas, on June 13, 2019, President Andrzej Duda and First Lady, Agata Kornhauser-Duda, visited with Texas Polonia and personally honored the Most Reverend Bishop Emeritus John W. Yanta with the Commander’s Cross of the Order of Merit of the Republic of Poland.  The decoration is awarded to non-citizens and Poles living abroad for distinguished contributions to international cooperation, and was presented in recognition of the Bishop’s many initiatives in the Polish community, most notably his vision and leadership in founding the Polish Heritage Center at Panna Maria.  Panna Maria was the site of the first and oldest permanent Polish settlement in the U.S. dating from 1854.  In addition, the Heritage Center was one of nine Texas Polonia organizations individually honored with the presentation of a Polish flag by President Duda. Bishop Yanta thanked President Duda and the First Lady, stating, “You honor us with your presence—welcome to America and to Texas and its Polonia.  I humbly accept this prestigious award in the name of our Polish people living today in Texas and throughout the USA, and in Poland.  God’s divine providence has inspired us to build the Polish Heritage Center.  The Center is nearing completion and it honors the memory of our ancestors and their strong values of faith, family and community.” 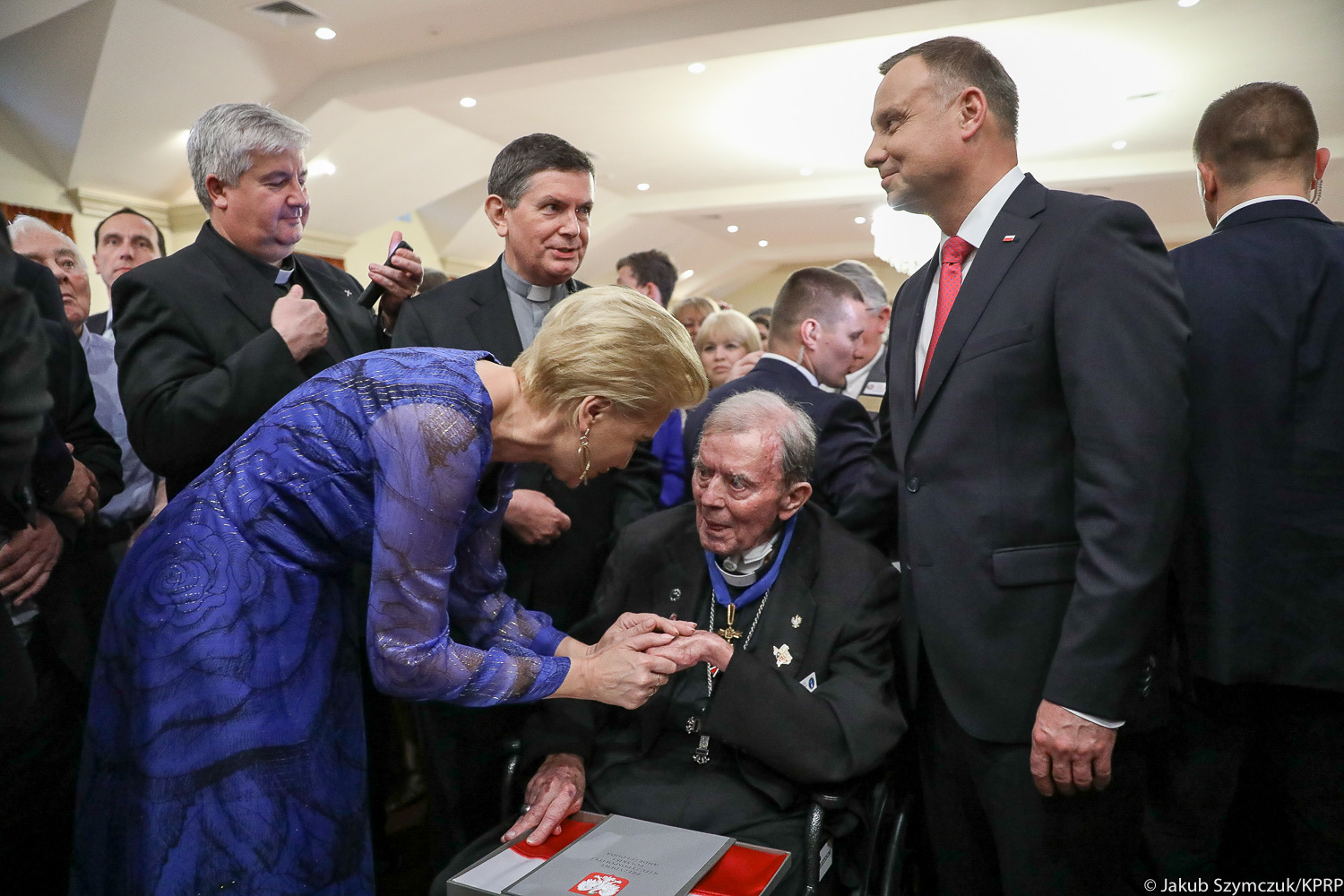 The reception was co-hosted by Robert Rusiecki, Consul General of the Consulate General of the Republic of Poland in Houston, and Fr. Waldemar Matusiak, pastor of Our Lady of Częstochowa.  Many high-ranking Polish government officials were in attendance, along with over 300 representatives from Texas Polish communities, churches, and organizations.  President Duda congratulated Texas Polonia for steadfastly promoting Polish culture, honoring many who have made a considerable impact in preserving their Polish heritage.

This was the first visit by a sitting Polish president to Texas.  President Duda’s other objectives were to meet with Texas energy leaders to discuss energy security in central Europe and to establish research collaborations with MD Anderson Cancer Center in Houston.  Poland received its first shipment of Texas LNG from Sabine Pass in June of 2017, and shipments of LNG have continued.  Referring to the current situation of Poles and Poland, Duda described the recent 30 years as a special time “during which an independent and truly sovereign Poland has been built.”  He also emphasized that Poland was the fastest-developing country in Europe.  Poland was recently named the 4th fastest developing country in the world.

Bishop Yanta is the great-grandson of Polish immigrants who were part of the founding of Panna Maria.  His roots were nourished on a farm by faith-filled parents and grandparents, who instilled in him a deep love for his Polish and Catholic heritage. The bishop’s long career as a priest and bishop reflect his commitment to community affairs, marriage, family, and life.  Highlights of his leadership include pastorates at Sacred Heart and St. James in San Antonio and numerous archdiocesan assignments.  He was founder and executive director of the San Antonio Neighborhood Youth Organization, Today’s Catholic newspaper, Catholic Television of San Antonio, the Polish American Priests Association, the Texas division of the Polish American Congress, and the Polish American Council of Texas among others.  Yanta was the first Texan of Polish descent to become a Bishop.

The Polish Heritage Center, a $14 million facility currently being completed, will tell the stories of the Polish immigrations and settlements in Texas beginning in Panna Maria and spreading to numerous other communities.  This high tech state-of-the-art 16,500 sq.ft. Center, with an estimated opening date in early 2020, will be a unique destination for families, educational groups, scholars, researchers, and history buffs.  The Center is intended for the benefit and enjoyment of all of American Polonia, all 10,000,000 strong, and our brethren in Poland.  It will be a vibrant location for lectures, workshops, classes, movies, and special events.