HomeAsk your Senator to co-sponsor S.Res. 566All standardsFeatured StoriesHistorical Memory and Interpretation – the...

Historical memory and the interpretation of past events is something which many nations in Europe are currently struggling with. In particular, events from World War II prove to be most difficult as nations pick and choose what to glorify and overlook. East Central Europe is no exception. In Poland, for example, the question of complicity in the Holocaust is a topic which always sparks heated debate. In the case of Ukraine, the same can be said about the question of collaboration with the Nazi Germans during the war. My research on the Ukrainian question of wartime collaboration has shed light on a lesser known aspect of it between the Nazi German occupier and the occupied people in the General Government (GG) – the territory of Poland not directly annexed into the Third Reich in after 1939. In creating the General Government, the Germans aimed to economically exploit that region for the needs of the Third Reich to ultimately create a living space for colonists to settle and Germanize it. After exterminating all the territories’ Jews and the Polish intelligentsia, left-over Poles were to work and toil for the new German masters.

Through occupying and administering over prewar Polish territory, aside from the dominant Poles and the large number of Jews, the Germans inherited sizable numbers of other ethnic minorities such as Ukrainians (prewar Germans were considered Volksdeutsche or ethnic Germans regardless of their previous citizenship). To rule over these non-Germans, the occupier initiated the tried imperial theory of divide and conquer – fragmenting the occupied peoples in a means of gaining collaborators and weakening previous concentrations of power in order to better impose their will.

Put into practice in the General Government, divide and conquer meant: isolating Jews and defining them as a subhuman people; deconstructing the Polish national group into a series of primitive tribes and implementing a policy of cultural denial (severely limiting primary or vocational education and claiming that cultural achievements were in fact German ones) upon them; and promoting newly-recognized ethnic groups such as the Ukrainians or Highlanders (the so-called Goralenvolk) in a means of gaining sympathizers and neutralizing Poles and Jews. This was done by, for example, playing on the prewar antagonisms the Ukrainians harbored toward the Polish state, especially toward governments which sought to forcibly polonize them.

In their administration of the General Government, the Germans outlawed all previous political parties and associations. To give some nominal representation to the occupied peoples, the Germans created a series of ethnic welfare and aid committees for Poles, Ukrainians, Jews (until 1941), and Highlanders. In theory all were apolitical according to GG law yet according to the German plan of divide and conquer, some committees were afforded more latitude than the Polish and Jewish ones.

The Ukrainian Central Committee (Ukraїns’ki Tsentral’ny Komitet – UTsK) was one example. It was led by Volodymyr Kubiiovych, geographer, academic-scholar and former docent (a specific academic appointment at or below the full professor rank) at the Jagiellonian University in Kraków. The UTsK consisted of a central headquarters in the GG capital of Kraków, as well as representations in all 5 districts with branches and subsidiaries throughout. Membership in the UTsK consisted of Ukrainians with various political outlooks – from radical to moderate nationalists and socialists. In this case, the UTsK became more than a welfare and aid organization but rather a cultural-political center for Ukrainian life in the GG. Given the German occupier’s desire to moderately favor Ukrainians over Poles and Jews in their racial scheme, Ukrainians, through the UTsK, were given modest concessions in socio-economic, educational and religious spheres if only to maintain a constant state of conflict with Poles in order to rule over both. 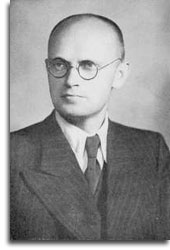 Kubiiovych and members of the UTsK willingly collaborated with the Germans in the GG. Both the occupier and the UTsK viewed their collaboration in terms of a relationship of mutual cooperation; each using the other to achieve individual and mutual goals. Nationalists in the UTsK – Kubiiovych included – viewed aspects of welfare and aid in broad terms. To them this meant more than setting-up soup kitchens or dispensing foodstuffs and supplies. Kubiiovych adamantly viewed collaboration as a means of neutralizing or removing Polish elements from ethnically-mixed regions which he and other nationalists viewed as ethnographic Ukrainian territory.

Men like Kubiiovych saw the moment of Polish collapse as their long awaited opportunity to advance an agenda, one which ultimately envisioned a future Ukrainian state. Given their experiences before the war, these individuals had no reason to support either Warsaw or Moscow during the war. Ukrainian collaboration with the Germans can be read as their reaction to those prewar policies. In the GG, the Ukrainian nationalist agenda meant first and foremost removing any vestiges of prewar Poland with the help of the strongest revisionist power on the continent – Nazi Germany. By championing Ukrainian interests and expressing loyalty to the occupier, Kubiiovych hoped to save the Ukrainian substance as well as to create a nationally-conscious group. As he wrote in 1941:

A new Europe is being born, one in which the Ukrainian people will find its place… German dominance will also be our dominance and that is why cooperation with the Germans… lays in our interests.

In memoranda he sent to the occupation authorities, Kubiiovych envisioned creating an autonomous Ukrainian ethnographic region within the New Order Hitler was creating on the European continent. He proposed cleansing ethnically-mixed territory deemed Ukrainian by moving Poles onto indisputably Polish territory and returning local, small-businesses once held by Jewish merchants and shopkeepers – who in his eyes exploited average peasants and city dwellers – to Ukrainian hands. Through the concessions they gained, he hoped to reawaken or create national conscious Ukrainians in the GG who, in turn, would ultimately forge a new social hierarchy consisting of clergy, an intelligentsia and a middle-class; all with strong Ukrainian nationalist sentiments.

What did UTsK collaboration and their relationship with the occupier look like in practice? Through its GG-wide network, the UTsK contributed to: collecting harvested crops to meet mandated German consignment quotas, metals (including church bells) or winter clothing; and encouraging Ukrainians to volunteer for labor in the Reich. In 1943, after the Germans permitted for the formation of a Ukrainian SS division, Kubiiovych spear-headed the recruitment drive in the Galicia District, calling on young Ukrainians to volunteer into its ranks as a means of fighting side by side with the Wehrmacht in the anti-Bolshevik struggle. For this ‘dirty work’ men like Kubiiovych hoped to be part of a future administration on Ukrainian ethnographic territory. However, this never came.

Ukrainian collaboration in the General Government undoubtedly achieved what the Germans envisioned – to keep Poles and Ukrainians in a constant state of friction with one another by openly favoring the latter. However this policy soon turned into an occupational “side effect” as Ukrainian radical nationalists slaughtered Poles in their messianic quest to create a Ukraine for Ukrainians in the Volhynian and Eastern Galician regions while Poles enacted revenge upon Ukrainians who they perceived to be collaborators and national traitors, especially in the Lublin District. This civil war which erupted in full in 1943 only benefitted the oncoming Red Army and Soviet occupiers in the long run. In addition, regular Ukrainians were not spared from German punishment during the war while many of the UTsK’s initiatives were often undertaken without consultation. Certainly, many average Ukrainians engaged in the UTsK’s activity simply as a means of survival. 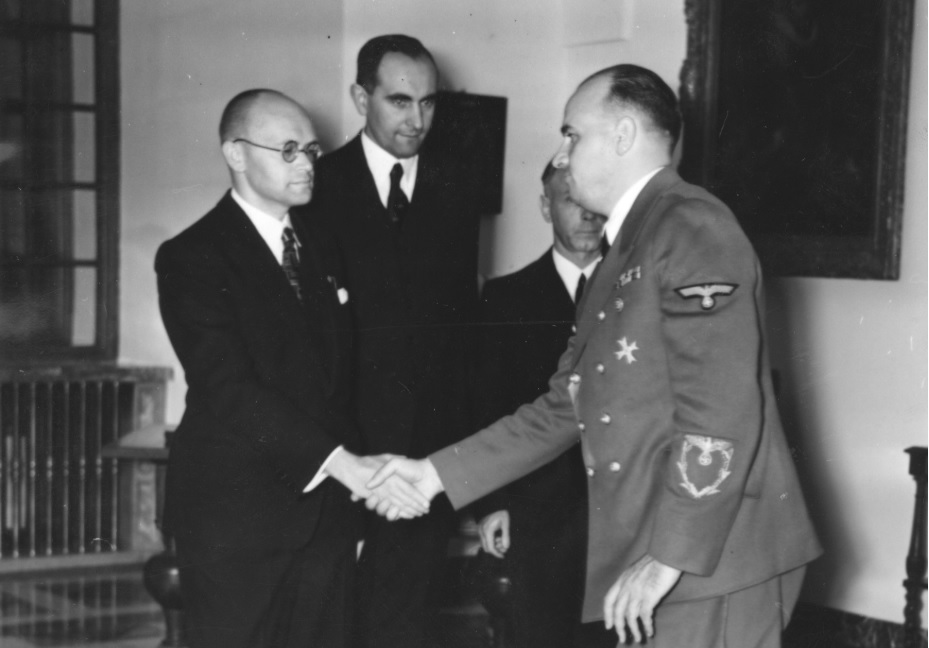 Kubiiovych shacking hands with Hans Frank in the Wawel was on the first anniversary of the creation of the General Government (October 1940). Image source: Polskie Narodowe Archiwum Cyfrowe

Volodymyr Kubiiovych and many members of the UTsK fled the General Government in the wake of the Red Army’s advance and occupation of that region in 1944-1945. Ultimately, these men escaped the fate of those who the Soviets deemed fascist collaborators – arrest, torture, show trials, deportation and hard labor in the Far East or simply death. After the war, Kubiiovych returned to a life of scholarship and academia; working at the Ukrainian Free University in Munich and later moving to France where he devoted his life to creating his opus magnum – the multi-volume Encyclopedia of Ukraine. His wartime role was forgotten or overlooked.

Without any doubt the question of collaboration with the Germans during World War II arouses various emotions. However, such topics as the one briefly summarized here are necessary to confront if only to gain an understanding into not only how and why certain ethnic groups or people bought into the German vision of a New Order but also the goals, intentions and effects of Nazi German occupational policies and politics on occupied non-German peoples. In the case of the UTsK, these two aspects went hand in hand with one another. Only by confronting such difficult and uncomfortable topics can a wider context of personal goals and wartime aims be determined and discussed openly.

Are you interested in exploring this topic further? Click below to support the work of the Polish American Congress.