HomeAsk your Senator to co-sponsor S.Res. 566All standardsFeatured StoriesThe Economic Effect of Brexit on Poland (Part 2)

The Economic Effect of Brexit on Poland (Part 2)

How will Polish-UK relations look after Brexit?

The first article of this three-part series recently discussed the successes of Poland growing economy. This article will focus on Polish-UK relations and their future following the United Kingdom’s exit from the European Union (EU).

On December 20, 2018 Polish Prime Minister Mateusz Morawiecki traveled to London to meet his British counterpart Prime Minister Theresa May for the third set of Polish-British intergovernmental meetings. Topics discussed ranged and included: bilateral cooperation, economic matters, security and defense, mutual cooperation in the field of science and education, and of course the Brexit deal. Claiming the EU-Brexit deal would be good for the UK, Morawiecki stated: “[The] United Kingdom is one of our key partners in the field of security, but also science and promoting inventions and innovation.” Regarding defense, he added that “transatlantic cooperation and ensuring NATO’s continued consistency in areas such as the eastern flank remain crucial.”

The Brexit model includes a departure treaty and a political declaration for future cooperation. The treaty directly regulates the UK’s withdrawal from the EU, stipulating an interim period until the end of 2020. During this time the UK will maintain its character as a member state but without any deciding powers. It also guarantees the rights of citizens of one side living on the territory of the other. The declaration describes political and economic cooperation between the UK and EU. This includes the UK’s future involvement in mutual EU educational, innovative, or defense industry cooperation. In order for the model to take effect, ratification by the British parliament is necessary. Of late, this has been a divisive issue in London and throughout the British Isles.

According to experts, the UK-EU understanding secures the interests of the latter. It de facto prevents the UK from pursuing an independent trade policy outside the EU’s customs regulations; what was to be a key Brexit economic benefit for the UK in the first place. This means that the EU can imply that because of this connection, the UK will be forced to support the EU’s position in any future global trade conflicts.

Concerning Poland specifically, the Brexit model secures two important aspects: Polish rights in the UK and maintaining liberty in mutual trade. During Brexit talks, the Polish side spoke of guaranteeing Poles living in the UK a safe home if they decide to stay. Since 2016 the number of Polish nationals in the UK reached over 900 thousand; the largest foreign-born community there. This number rose exponentially following Poland’s accession to the EU and the opening of western borders in 2004. Then, some 95 thousand Poles moved to the British Isles. A special EU Settlement Scheme, which will take effect this year, will allow over 3 million people who made Britain their home to legally stay in the UK.

Theresa May urged Poles to stay in the country after Brexit, insisting they are more than welcome in the UK. Certainly for Poland, the possible Brexit deal includes an important aspect concerning Poles living there – guarantees of EU citizens’ rights after Brexit. However this did not stop Morawiecki from urging his compatriots on the isles from a return to Poland after the UK’s exit. During the intergovernmental meeting, Morawiecki commented: “We are happy about the fact that they found a new home, however, as our economy is blooming, we would like to encourage our citizens to consider returning to Poland, although we respect everyone’s personal choices.” However this may be difficult to foresee as many Poles in the UK have lived there for over 15 years, have opened small-businesses and are willing to remain. The question remains – how many such Poles are willing to leave behind the life they worked hard for in the UK and move back to Poland to start life anew? Perhaps Poles living in the UK for less than 5 years will be more willing to consider moving back to Poland. 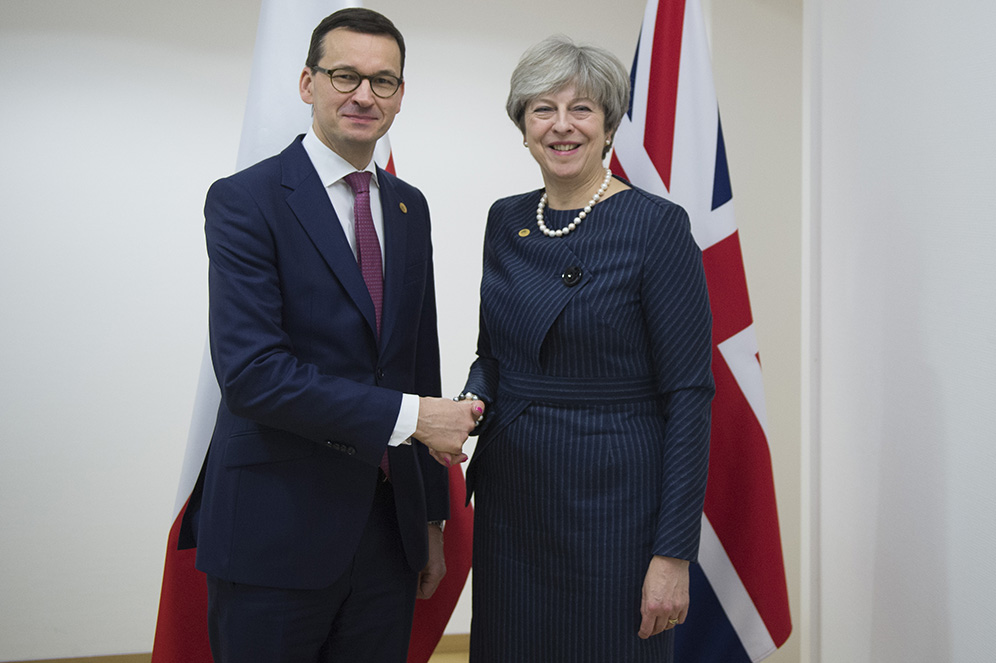 Security is a subsequent, vital aspect in any future Polish-UK relationship. During her visit to London on January 7, 2019 Polish minister for international dialogue Anna Maria Anders stated that whatever the ultimate Brexit outcome, Polish-UK relations will remain strong. In her opinion, even though the UK would leave the European Union, it would not leave Europe itself. Close mutual relations will continue. The basis for this, according to Anders, is NATO collaboration. According to Anders, strengthening NATO ties wherever and whenever possible are key to the Alliance’s future success while the Merkel-Macron idea of creating an EU “super army” would only weaken NATO’s role and divide Europe.

British military forces are among the members of NATO’s multinational presence throughout the alliance’s Eastern Flank. Their battlegroups, part of rotating contingents, are currently stationed in Estonia – some 800 troops of an armored infantry battalion and supporting elements – with a contingent of about 150 troops of a Reconnaissance Squadron in Poland. Maintaining strong ties with the UK means a strong NATO bond. This in turn means further commitment to NATO’s Enhanced Forward Presence – the deterred and defense military posture agreed upon during the Warsaw Summit in 2016 to defend eastern member-states from acts of Russian aggression.

In forging relations with a post-Brexit UK, Poland should work for closest possible political and economic relations. The unity of economic and security interests, and a community of values connects the UK to the EU, and should form a strong basis for shaping future relationships with Poland and the EU in these unpredictable times.

The upcoming third and final installment in this 3-part series will attempt to determine whether Brexit can derail Poland’s economy.