HomeAsk your Senator to co-sponsor S.Res. 566All standardsFeatured StoriesThe Importance of NATO to Poland

The Importance of NATO to Poland

How does Poland benefit from belonging to NATO?

2019 marks 20 years since Poland joined the North Atlantic Treaty Organization (NATO). In those 20 years, Poland has enjoyed many benefits of its membership in NATO, particularly due to security, defense and peacekeeping efforts.

The main benefit that members can expect from being a part of NATO is that, in the event that any of them should be attacked by a third party, the entire alliance will respond as if they were each attacked, as stated in Art. 5 in the Washington Treaty. In return for security, members must pay two percent of their GDPs as requested by NATO. Poland is only one of five members who meets the two percent goal.

When Poland joined NATO, the Polish Armed Forces were expected to adapt to NATO standards. According to the Ministry of National Defense of the Republic of Poland, NATO stimulated “technical modernization, the transition from a military force based on conscription to an all-volunteer force, and thorough reform of its command system.”

Poland also engages in military training drills with NATO. In November 2018, Polish forces held the “Anakonda” exercise, which attracted 17,500 soldiers from 10 NATO member states. These drills were the largest ever held by Polish forces, according to Radio Free Europe. Participating in exercises, drills and missions with NATO member nations has allowed Polish Armed Forces to develop a notable ability to operate jointly with other allied armies at a level that was unattainable prior to joining the alliance. 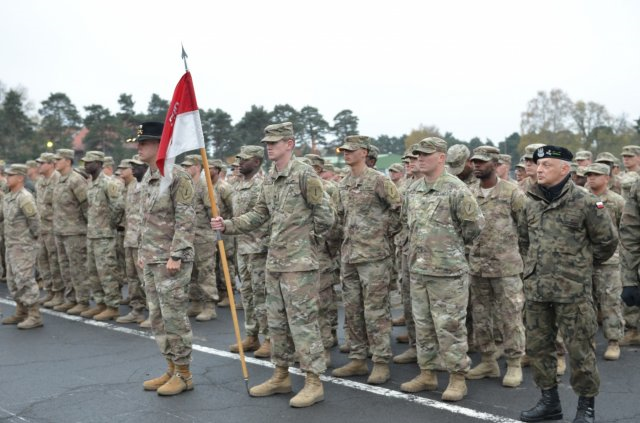 American and Polish soldiers participate in a ceremony to celebrate the partnership of the two countries on Oct. 23, 2017. (Source: https://www.army.mil/article/195788/us_and_polish_cavalry_troops_participate_in_patch_ceremony_)

Poland’s main security concern comes from Russia, which is no surprise considering the two nations’ histories – Poland spent 44 years under Soviet-imposed communism that left Poland with a stunted economy and resentment toward the Kremlin. As a member of NATO, Poland can expect significant military backup from other NATO members should the Kremlin attack Poland.

Since joining NATO, Poland has also gained from investments in infrastructure through the NATO Security Investment Programme (NSIP). According to the Polish Ministry of Foreign Affairs, through 2016 Poland has received PLN 1.4 billion (USD 375.5 million) from the program, while having contributed around PLN 900 million (USD 241.4 million) for a net gain of PLN 500 million (USD 134.1 million). These investments have gone toward the modernization of military infrastructure.

For the past 6 months, President Donald Trump has expressed interest in withdrawing the United States from NATO, claiming that it serves as a drain on American resources. Retired Adm. James G. Stavridis, the former supreme allied commander of NATO, criticized President Trump’s comments, calling potential American withdrawal from the alliance “a geopolitical mistake of epic proportion,” according to the New York Times.

United States withdrawal from NATO would put Poland and other European nations in greater jeopardy of aggressive behavior from the Kremlin.

However, in 2018, the Polish defense ministry offered $2 billion so that the United States would establish permanent military bases throughout the country. The proposal has become more urgent following the Kremlin’s annexation of Crimea in 2014, according to a 2018 Politico article. If accepted, the offer would create a backup security system for Poland against attacks from the Kremlin should the United States leave NATO.

Regardless whether the United States stays in NATO, assisting with Polish national security should be within American interests, as a strong and sovereign Poland serves as a valuable ally to the United States.

Are you interested in funding PAC’s advocacy effort? Do you want to know more about this issue of explore further? Join the cause with PAC by clicking